You’ve Been Assuming Your Whole Life

In each and every moment of our life, whether it is consciously or unconsciously, we are assuming a feeling. – Neville Goddard

For the readers of this article, I am going to assume that they are aware of this fact that whatever has been shown to them in their 3D world wasn’t an accident or coincidence, as there exists no such thing called accident or coincidence. Our 3D world is our consciousness that has been pushed out – i.e. oneself pushed out. Whatever we assume both consciously or unconsciously manifests in our world.

To explain this we will take the example of romantic relationships. I speak to quite a lot of people either over the phone or through email on a weekly basis. And the main reason why people are reaching out to me it’s because they want an SP (specific person) , which more often than not is an ex-partner. Interestingly, the big challenge that they have is how to assume that their SP is theirs, or yet again how they can ignore 3D. They are asking those questions as if they’d never done that before. But the truth is that they have. They’ve done it without any problem not that long ago, and that’s precisely why they are in the situation that they are in now.

You Have Assumed Your Present Situation

Talking to oneself is a habit everyone indulges in. We could no more stop talking to ourselves than we could stop eating and drinking. All that we can do is control the nature and the direction of our inner conversations. Most of us are totally unaware of the fact that our inner conversations are the causes of the circumstances of our life. – Neville Goddard

When I read people’s emails, or listen to their story about HOW they’ve lost that relationship that they so loved, adored, and want back, it’s pretty much always the same story. Before I read them I already knew what they’re going to say. It usually goes like this; I was always afraid that they’d leave me, I was fearful that I’d lose them, I was feeling that I was not good enough, I was clingy and needy… Sounds familiar? 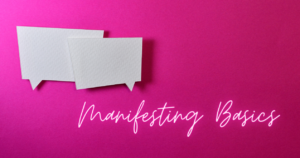 So, when I read or hear this type of comment from my clients, I have no doubt that they can assume very well indeed. They were totally able to assume a feeling about something that had not yet happened. And because they did such a good job, their partner had no choice but to conform to their assumption, and eventually, ended up leaving them. Is that what happened to you?

The same goes with the belief that you can’t ignore your 3D. Actually, you can and you’ve done it your whole life too. To take the same example of the SP, while things were still perfectly fine in your 3D, didn’t you start ignoring it? Yes, you did. You started ignoring your 3D by imagining the worst while everything was still fine in your 3D. So, apparently, you were not phased by 3D in this case, were you?

So, as you can see, you’ve been assuming things and ignoring 3D very easily and naturally your whole life, but you’ve done it in a very negative and even harmful way at times. And the reason why this is the case, it’s that we are, unfortunately, wired into the negative because of our upbringing and the society in which we live as well. When we understand that, however, we can start assuming for our own good.

Now, I realise that this is easier said than done, because in order to be able to do this the right way we need to work on our mental diet.

Until imagination becomes part of your normal, natural currency of thought, you will not act consciously. Like breathing, this awareness must become so much part of you that you will not turn to the left or to the right to praise or blame anyone.

When you know this presence it will not matter if you started life behind the eight-ball, or in a palace; as a poor, or a rich child; you will realise that life is always externalising what you imagine. – Neville Goddard

In order to be able to assume your wish is fulfilled and to ignore 3D when it doesn’t serve you, you need to change your mental diet. The reason why it was so easy for you to assume bad things and ignore the good 3D stuff while you started imagining the worst, it was based on your mental diet. Your thoughts create and they can only create according to their kind. Negative thinking can only create negative results.

This is why changing the way you think, changing your mental diet, should be your number one concern no matter what you want to manifest. Because manifesting anything while having negative thoughts wouldn’t get you very far anyway. It’s one thing to manifest the SP back into your life, but are you ready to keep them? How do you know that you’re not going to go back to assuming the worst? Unless you’ve been working on your mental diet, you wouldn’t know.

How to Change Your Mental Diet

Everything in the world bears witness of the use and misuse of man’s inner talking. – Neville Goddard

Sometimes people are confused by the term Mental diet and are wondering what it is exactly. Your mental diet is the sum of your thoughts. The type of thoughts that you entertain every day, and even while you’re sleeping in the form of dreams. All of it makes up your mental diet.

So basically, as long as you do not change your mental diet, your Law of assumption and imagination will also be the same. In order to be able to assume and imagine differently, you need to learn to think differently. And the easiest way to change your inner talking is by using a different one through the use of positive and specific affirmations.

Yes, after a while of conscious use of specific affirmations, you will catch yourself thinking about your affirmations. When that happens, my friend, you’ll know that you have succeeded in changing your mental diet. And when that’s the case, you will have no problem assuming your wish is fulfilled and ignoring 3D in a way that is going to serve you this time.