If you are hearing about Neville’s Law Of Assumption for the very 1st time in your life, then this blog article will help you to have a good glance at them and you will see for yourself how this law can help you see this world around you differently whilst transforming your life on a personal level at the very same moment.

1- Our Assumptions Materialise Into Facts

Believe in the reality of your assumption & watch the world play its part relative to its fulfilment. – Neville Goddard

According to Neville’s Law Of Assumption, if you have an assumption, no matter baseless, it would harden into fact if you keep assuming it. To prove this saying right, all you have to do is look back at your life & compare it to what you have assumed to be true & how it came out in reality. If you do this exercise seriously, you will notice that your assumptions have always manifested in your physical world. 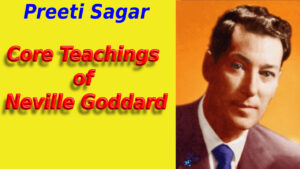 If you see it through a scientist’s eye then what they call a theory is an assumption and working to prove it with their utter determination, which results in turning a theory into a reality is the manifestation of an assumption into reality that surrounds a scientist..

That is why Neville taught us that by assuming the feeling of having or being what one desires to have or be, would eventually manifest in their physical world. When you believe in an assumption until it becomes your dominant thought & feeling, that assumption is left with no choice but to harden itself into a fact.

In other words, determination can do wonders. History is filled with examples of how a well determined assumption manifests itself in the physical world, all thanks to Neville’s Law Of Assumption.

So, observe your thoughts & feelings, and notice how what you assume to be true, is playing out in your real world at the moment.

2- Consciousness Is The Only Reality

Consciousness is the source as well as the substance that forms this entire world. So it is to our consciousness that we must turn to if we would want to discover the secret of this creation. – Neville Goddard.

In other words, just see inside whenever you are excited to know about learning how this creation around us came into being.

3- Imagination Creates Reality For You

Imagination is the only redemptive power in the universe. – Neville Goddard

Neville Goddard was famous for teaching us that, “God is in your wonderful human imagination.” The core teaching of Neville is that there is no God outside of us because it lives within us, and we are the God. That divine force we call God is having an experience through each and every human being, and it is our job, as humans, to harness that power to learn how to get the best of our imagination to have a life for us that we want. But, since God treats each and everyone as one and doesn’t see right or wrong the way our human-ego sees it, we can also imagine negative things for us, and thus get to live it.

Being the God of our reality, also means we have to be responsible for everything that happens to us, whether we’ve created it with a conscious or unconscious mind.

4- Feeling Is The Only Secret

Feeling is the one & only medium via which ideas are messaged to the subconscious. So, the one who does not control his feelings could easily impress the subconscious with undesirable states. – Neville Goddard

The very difference between a thought that manifests & one that doesn’t, it’s the feeling. Even if you have a passing thought that you feel to be true, that thought will manifest. When I worked on my inner self, I noticed that even momentary thoughts had manifested in my life whenever I felt them. That’s how I had a car accident once. Even though that thought had a short time span, still I truly felt it, and within less than 2 minutes I was in a small car crash.

This is why when you want to manifest a specific desire you need to feel it with real intention. You need to create an imaginal scene that will give you a feeling of being. When you repeat this process over & over, until it convinces your subconscious mind, your desire has to show up, because it is the Law Of Assumption.

5- Living In The End Or In The Wish Fulfilled

Persist in the feeling of the wish fulfilled & it will come true in your physical world. – Neville Goddard

Probably Neville Goddard’s teaching that I like the most is the teaching of living in the end, or living in the wish fulfilled, both which are the same thing. So, what does it mean & why is it so important that you learn about this teaching if you want to manifest your desires quickly & easily?

When Neville said go to the end, or live in the end, he was saying that if you desire to be married, for example, you need to imagine & feel that you are ALREADY a married person. Don’t bother having imaginations about your first date, because once you’ve imagined that you are already married, that first date & everything in between will just be “bridges of incidents’ ‘ that will occur on their own and will take you to your end goal. Meanwhile, if you get stuck in the idea of a date you might very well get stuck there & never manifest your marriage. Many people in the manifesting community have actually fallen prey to this.

No matter what you desire, you should go to the end (which is your end goal) for everything that you want to manifest, because it is the fastest way to get there.

There are some more of Neville’s Core Teachings that we will be discussing in forthcoming articles.